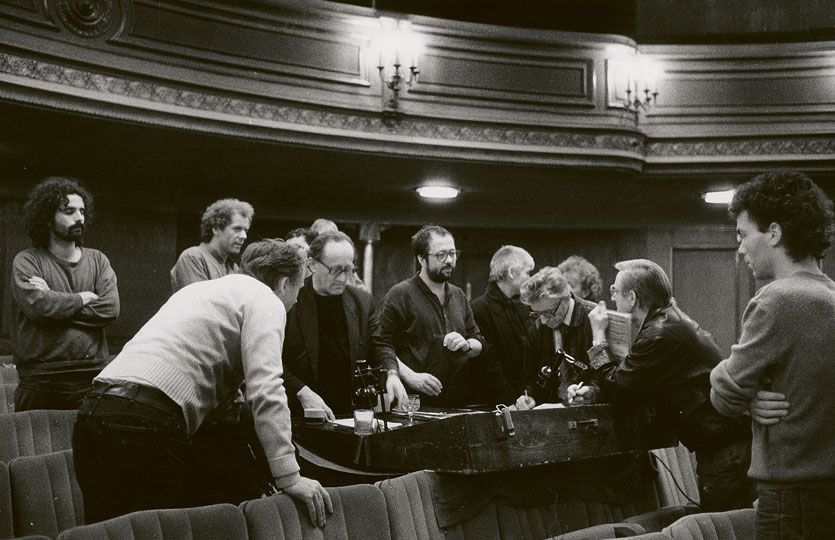 Heiner Müller and Erich Wonder met for the first time in the mid-1970s at Schauspiel Frankfurt. A working relationship and lifelong friendship developed that was marked by a wide variety of political and aesthetic experiences, a strangeness that became the productive motor of their collaboration. Their encounter led to theatre works that set standards because they reflected the political developments in both parts of the divided and reunited Germany in an aesthetically breathtaking way.

The “Erich Wonder – Sets of Wonder for Heiner Müller” exhibition makes these working processes visible. For the first time, it presents paintings, large-format watercolours, drawings, overpaintings and photographs by Erich Wonder along with photographs by Sibylle Bergemann and costumes by Yohji Yamamoto, among others. Film excerpts from the legendary productions The Scab and Hamlet/Machine will also be shown for the first time. The exhibition is curated by Stephan Suschke. The director and author worked with Heiner Müller from 1987 to 1995.

ERICH WONDER
(*1944 in Jennersdorf / Burgenland)
After graduating, he was an assistant at the playhouse in Bremen before becoming one of Europe’s outstanding stage designers at Schauspiel Frankfurt from 1972, working with such directors as Ruth Berghaus, Luc Bondy and Jürgen Flimm. Frankfurt am Main with its social conflict and urban light was formative for Wonder. Influenced by American films that discovered the artificial light of cities for their aesthetics, Wonder expanded theatre’s visual toolkit by using special spotlights.

HEINER MÜLLER
(*1929 in Eppendorf/Sachsen, † 1995 in Berlin)
Playwright, poet and director. One of the foremost German-language authors and intellectuals of the 20th century. Due to publication and production bans in East Germany, much of Müller’s work was first published in West Germany before it could be staged in East Germany. In his texts, Müller addresses the contexts and ruptures in German history. After the fall of the Berlin Wall, he was artistic director of the Berliner Ensemble and President of the Akademie der Künste, Berlin (East).

Guided Tours: Tue and Thur, 5 pm
with a limited number of participants

Free admission on Sun 16 Jan as well as for all visitors under 19, Tuesdays from 3 pm and every first Sunday of the month

Access to the exhibition only with a time slot ticket. We recommend advance booking at adk.de/tickets.