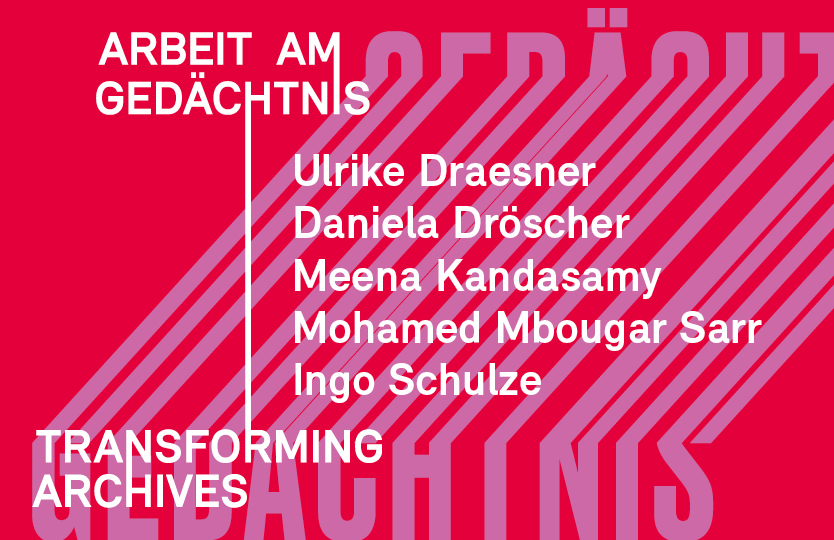 Literature as evidence, and the mindfulness and resistance of literary memories: The writers Ulrike Draesner and Ingo Schulze, members of the Akademie der Künste, Berlin, as well as Meena Kandasamy and Mohamed Mbougar Sarr, fellows of the JUNGE AKADEMIE, read and talk in a literary-biographic talk about personal and collective memories in relation to colonial past and authoritarian memory cultures of the present, gaps in the archive and the writing of counter narratives.

Ulrike Draesner is a poet, novelist, essayist and translator. She lives as a freelance writer in Berlin. Since 2019, she has been a member of the Akademie der Künste, Berlin, Literature Section. She studied in Munich and Oxford; from 2015 to 2017, she taught at Oxford University, and since 2018 has been a professor of German literature and literary writing at Leipzig University. The awards she has received include the LiteraTour Nord Prize, the German Prize for Nature Writing, the Bavarian Book Prize, the GEDOK Prize (2020) and the Gertrud Kolmar Preis (2019).

Meena Kandasamy is a poet and novelist who was born in Chennai, India. She has published two collections of poetry, Touch (2006) and Ms Militancy (2010). Her critically acclaimed debut novel, The Gypsy Goddess (2014), tells the story of the 1968 Kilvenmani massacre. Her second novel, a work of autobiographical fiction, When I Hit You: Or, The Portrait of the Writer As A Young Wife (2017) was shortlisted for the Women's Prize for Fiction 2018. Her latest novel, Exquisite Cadavers (2019), is a work of experimental fiction that investigates storytelling. She divides her time between London and Tamil Nadu.

Mohamed Mbougar Sarr is a writer born in Senegal, where he went to college and high school at a military institute before studying literature and philosophy in Paris, France. With a great interested in postcolonial and de-colonial works and thoughts, he has published three novels so far; all of them question the complexity of some contemporary situations, in various places (terrorism in West Africa; hospitality (or not) towards immigrants in Sicily; homosexuality in Senegal), and focus on a political and social approach. Currently his focus is more with literature itself: its power, possibilities, failures, secrets.

Ingo Schulze is a writer, living in Berlin. His debut novel 33 Augenblicke des Glücks (33 Moments of Happiness) was published in 1995, since then several novels and anthologies have followed: Simple Storys in 1998, Neue Leben (New Lifes) in 2005, Adam und Evelyn in 2008, Orangen und Engel (Oranges and Angels) in 2010, Peter Holtz in 2017 und zuletzt Die rechtschaffenen Mörder (The Righteous Murderers) in 2020 und Tasso im Irrenhaus (Tasso in the Madhouse) in 2021. His books have been translated into 30 languages, received multiple awards, and been cinematized. He is a member of the Akademie der Künste, Berlin, the German Academy for Language and Literature and the Sächsische Akademie der Künste.

In German and English